Isn't it an amazing spring so far! Everything's so fresh and green and vibrant. I'm loving all my dog walks and have enjoyed my training runs for my Half Marathon (more about that next week) so much over the last few weeks, watching all the trees and wildflowers burst out in such abundance. There's been so much sunshine too and it makes everything look, and feel, so very beautiful.  Practicing yoga in the Studio with the door open is a real treat, as is being able to move straight from my final pose into Savasana. No need to faff about putting socks and jumpers and blankets on - just letting go and releasing into Savasana. This easeful transition from movement to rest is magical and special and, when it's warm enough not to need another layer, the spell remains uninterrupted and unbroken.

I've been searching out quieter areas to walk and run than the usual way-marked paths and have come across some wonderful, almost-wild places - even here in busy Surrey. Little pockets of quiet - thick with the growth of early purple orchids, bluebells, stitchwort, yellow-archangels, wild garlic (also known as Ramsons) and other floral beauties that make me feel as though I'm the only one who is privileged to see them. I know I'm not, but the paths are narrower and less defined and feel, well, wilder.

They make me think of two of my favourite poems which I'll share with you here in case you like them too.

The Peace of Wild Things by Wendell Berry

When despair for the world grows in me
and I wake in the night at the least sound
in fear of what my life and my children's lives may be,
I go and lie down where the wood drake
rests in his beauty on the water, and the great heron feeds.
I come into the peace of wild things
who do not tax their lives with forethought
of grief. I come into the presence of still water.
And I feel above me the day-blind stars
waiting with their light. For a time
I rest in the grace of the world, and am free. 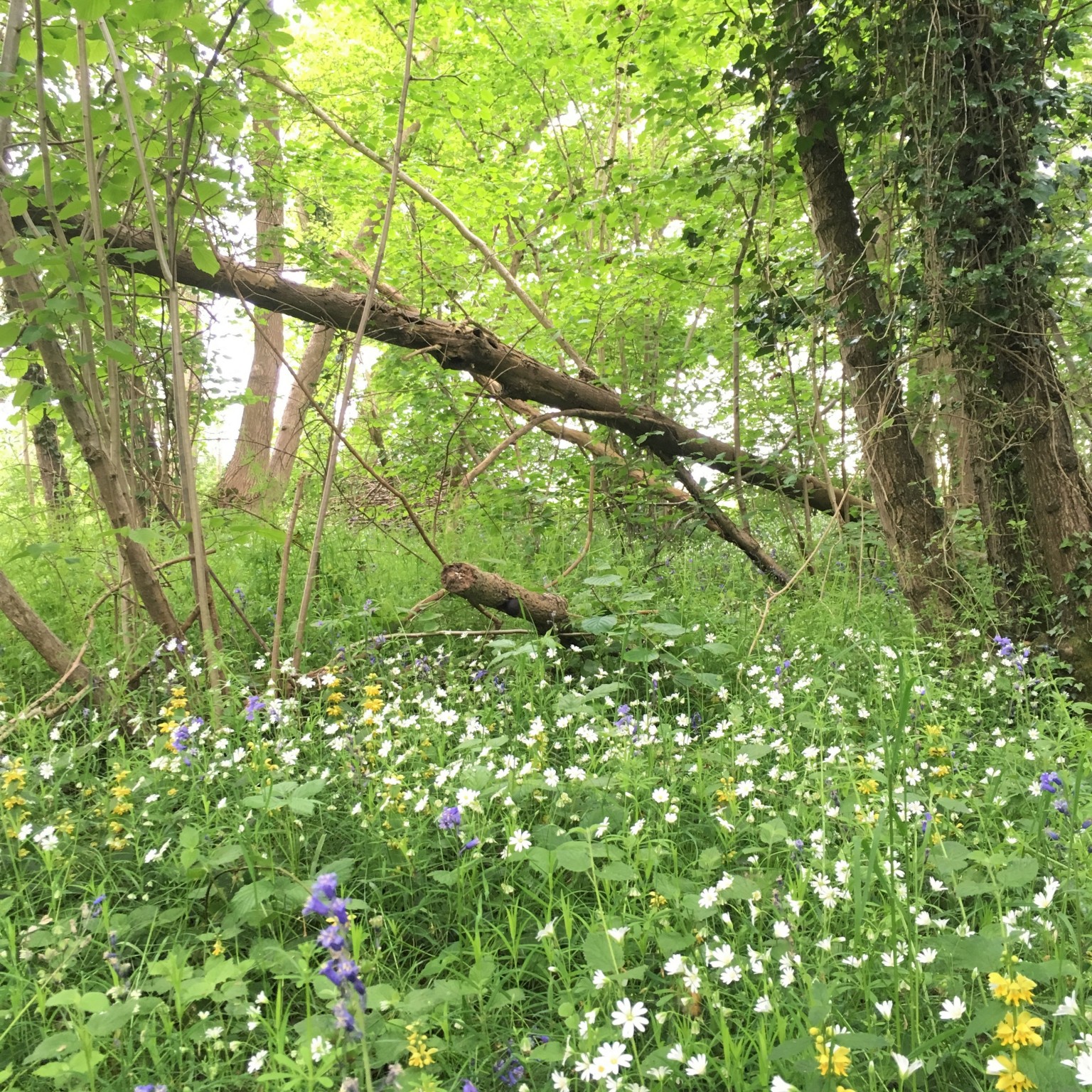 Bluebells, stitchwort and yellow archangels in a wild spot on my run

The Road Not Taken by Robert Frost

Two roads diverged in a yellow wood,
And sorry I could not travel both
And be one traveller, long I stood
And looked down one as far as I could
To where it bent in the undergrowth;

Then took the other, as just as fair,
And having perhaps the better claim,
Because it was grassy and wanted wear;
Though as for that the passing there
Had worn them really about the same,

And both that morning equally lay
In leaves no step had trodden black.
Oh, I kept the first for another day!
Yet knowing how way leads on to way,
I doubted if I should ever come back.

I shall be telling this with a sigh
Somewhere ages and ages hence:
Two roads diverged in a wood, and I—
I took the one less travelled by,
And that has made all the difference. 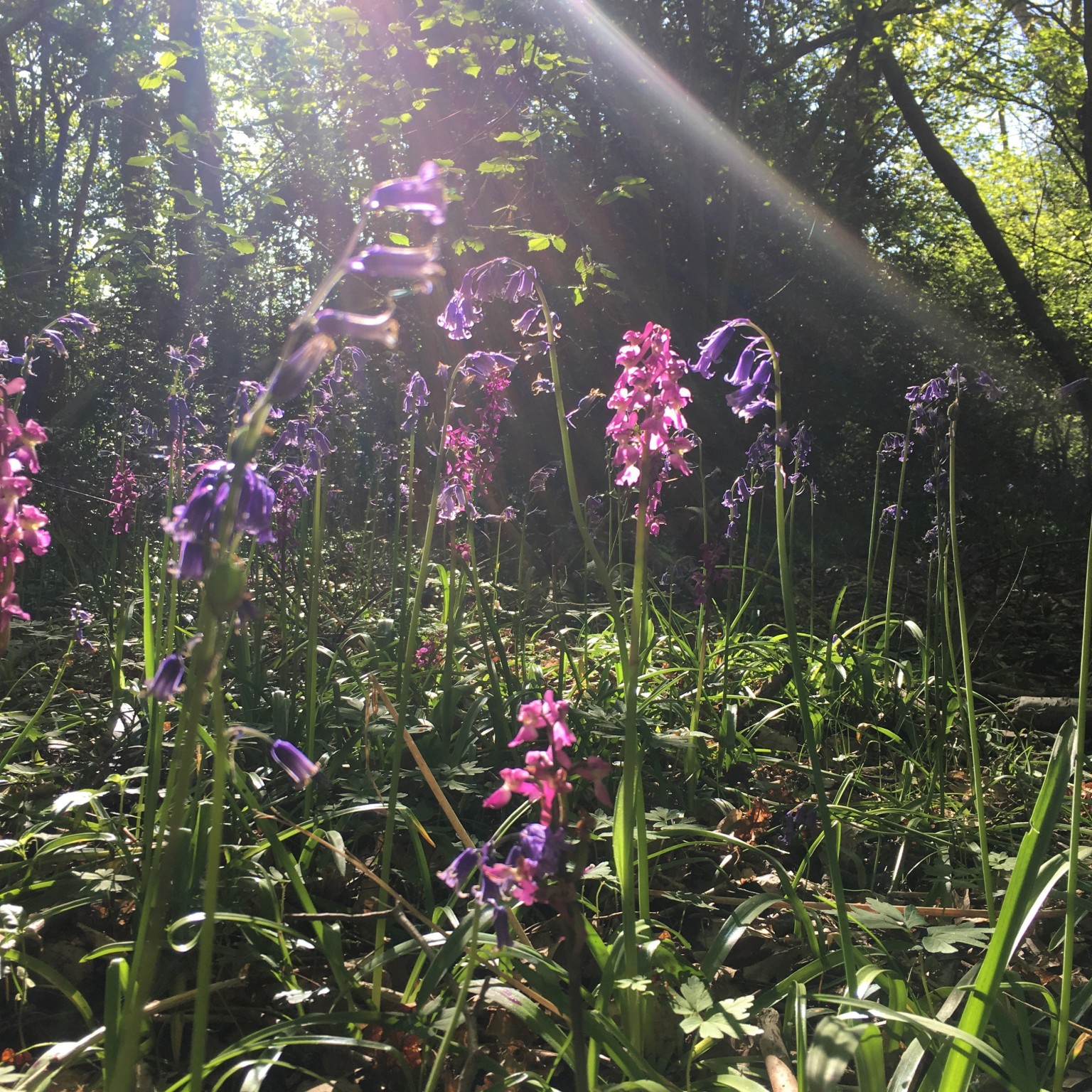 Bluebells and Early Purple Orchids in the early morning sunshine

This Week's 5 Pose Flow... features a lovely variation of the pose Wild Thing (Camatkarasana). It's an arm balance and a backbend combined and can be challenging for tricky shoulders and wrists so take care. However, it's more accessible than the full Camatkarasana pose and much more do-able than Wheel Pose (Urdhva Dhanurasana), which requires you to push up from a prone position.

- take the left hand across to the right knee and the right hand behind for a twist,

- then press down with left foot, right shin and right hand to lift the hips up. Arch the spine, lift the heart and the thoraccic spine between the shoulder blades. Lift the hips even further and press the pelvis forward to open the front of the body. Take the arm back if the shoulder feels comfortable.

- spiral your way back down to Head to Knee Pose then lift the right knee up, straighten the leg out and fold into Seated Forward Bend (Paschimottanasana)

- ease your way back up to Staff Pose.

This Week's Recipe... is a fresh and green and vibrant Pea and Mint Pasta

A vegan take on pesto, this recipe from Waitrose makes a super-simple and delicious supper.

2 sprigs of mint, leaves only

Finely grated zest of 1 lemon, plus the juice of half a lemon (go easy on the lemon - I would personally use less next time) 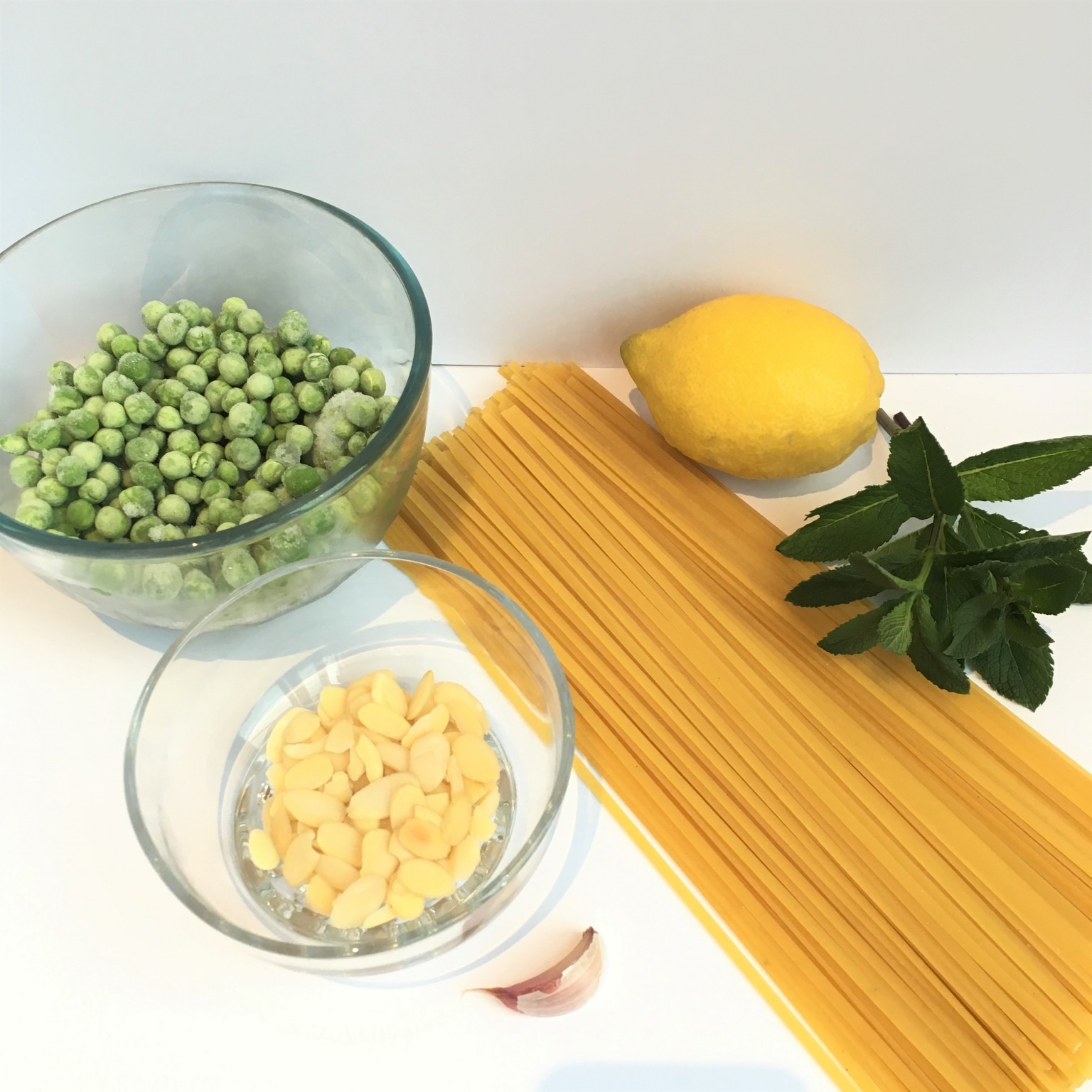 Bring a large pan of water to the boil. Add the peas and blanch for 1 minute until just defrosted. Remove with a slotted spoon. (This was the hardest bit - the peas kept escaping!)

Return the water to the boil and add the pasta for the recommended time until tender. Drain, reserving 4 tablespoons of the cooking water.

Meanwhile, using a stick blender, whizz the mint, almonds, garlic, 1 teaspoon of lemon zest and juice with three-quarters of the peas until chunky. Season. Stir in the reserved water, then toss with the pasta and remaining peas.

Scatter with the remaining lemon zest and serve. 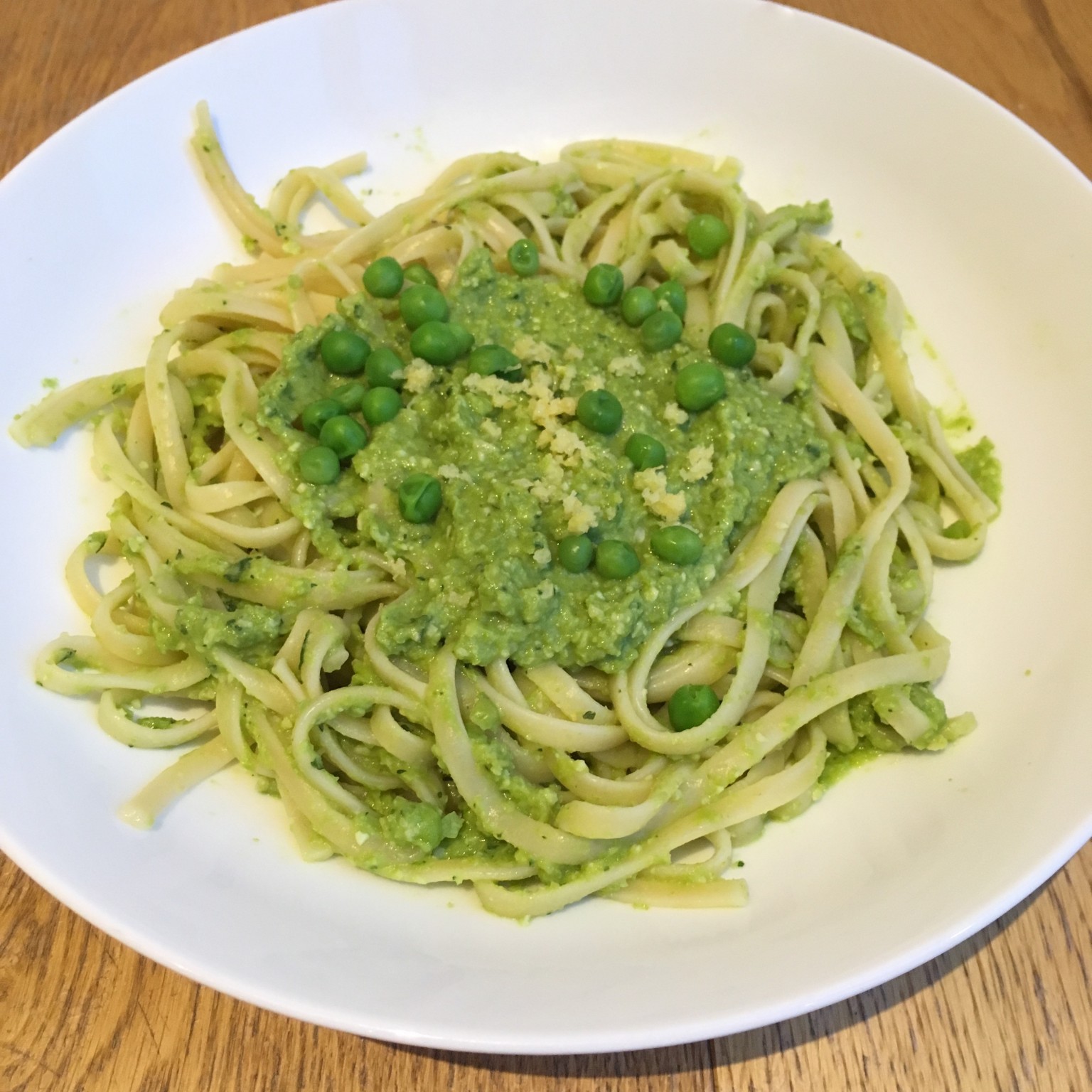 The words sung in this mantra are "Kali Durge Namo Namah, Uma Parvati Ananda Ma". Which translates as "Salutations to Kali, Durga, the Fierce Mother who protects her devotees and Uma Parvati, consort of Shiva, Bliss-filled Mother".  Are you ready for this explanation??  It's complicated! Deep breath... Kali is a Hindu goddess. She has blue-black skin and a fierce demeanour and is often depicted in Indian art fighting with a bloodied knife and carrying the severed head of a demon. She is destructive and is associated with the passage of time and death and yet she is also associated with strong motherly love. She is an aspect of the goddess Durga who is invincible and seen in Indian art riding on a tiger carrying knives in all of her 8 arms! She is passionate and courageous, righteous and loyal, and invincible. Durga is an aspect of the goddess Parvati who is the goddess of fertility, love and devotion, as well as of divine strength and power. She has many other names, including Uma, and she is the gentle and nurturing aspect of the Hindu goddess Shakti, the consort of the great god Shiva. Shakti is the concept or personification of divine feminine creative power, sometimes referred to as “The Great Divine Mother”. Phew! Told you it was complicated!  These Hindu goddesses are powerful, revered and respected and it's empowering to learn about them - we can see aspects of ourselves in them and invoke and invite a bit of their essence into our lives when we need it - they are the original 'girl power'.

This track is hypnotic and relaxing - a bit more of the gentle, nurturing goddess than the fierce, fighting one.  Enjoy.

This Week's Video... Where the Wild Things Play

This short video was one of the films at the Banff Film Festival that I went to recently.  It's inspiring and invigorating and I hope will encourage you to get out there and do your thing, whatever that is.  Life is out there, waiting for you to explore and have fun. Get out there and be wild - maybe not quite as wild the ladies in the video - but invoke a bit of Kali and Durga's fierceness and challenge yourself to get out there and do something... walk, cycle, run, hunt for wildflowers... whatever... just do it...

Wasn't that fab? And I love the song, and the lyrics too.  It's called Short Skirt Long Jacket and it's by Cake (and I want fingernails that shine like justice too!)

Finally, while we're on the subject of wild things, there's still time to go and see The Wildlife Photographer of the Year Exhibition at the Natural History Museum in South Kensington, London as it's been extended until 1st July. It's a display of the natural world in all its amazingness, from tiny insects to great big mammals, and I guarantee it will leave a lasting impact on you. You can preview and learn more here and you can book tickets here. Go! I thoroughly recommend it.

Until next time... thanks for reading.